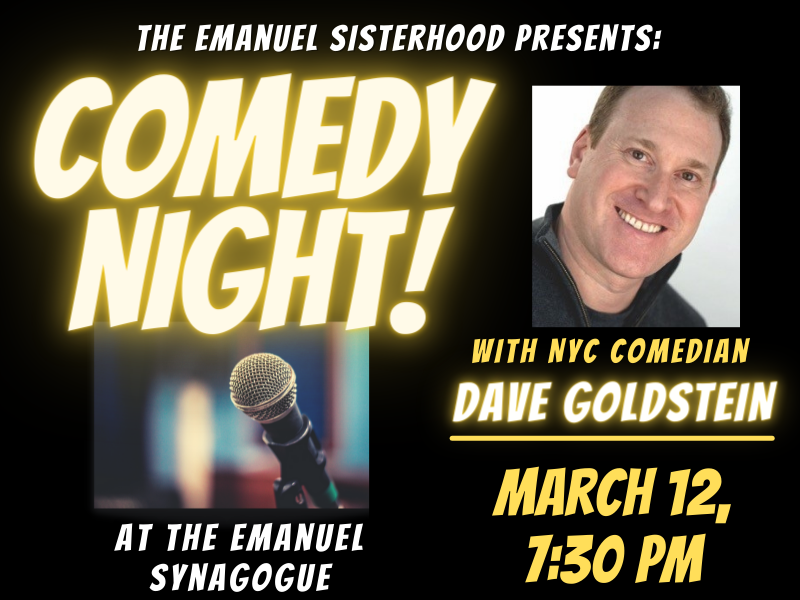 Comedian Dave Goldstein at The Emanuel: OPEN TO ALL!

Join us for an evening of laughs at The Emanuel Synagogue with Comedian Dave Goldstein.

You may recognize comedian and actor Dave Goldstein from one of his many appearances on NBC’s Late Night with Conan O’Brien, including a particularly memorable role as a naked cop directing traffic in front of the Metropolitan Museum of Art on 5th Avenue in New York City. His stage act, which has been praised by The New York Post (“…funny”) and The Asbury Park Press (“…his comic star is on the rise!”), is a blend of original writing and inspired live riffs. He has performed stand-up comedy on The Comedy Network, Sirius/XM Satellite Radio, and The National Lampoon Radio Network.

Three gift baskets will be raffled.

Cost: $30* includes coffee and dessert. Seating will be at tables of 6

*A portion of the proceeds will help fund safety and security initiatives for Emanuel Synagogue members and guests.

All COVID protocols will be observed, including the wearing of masks.