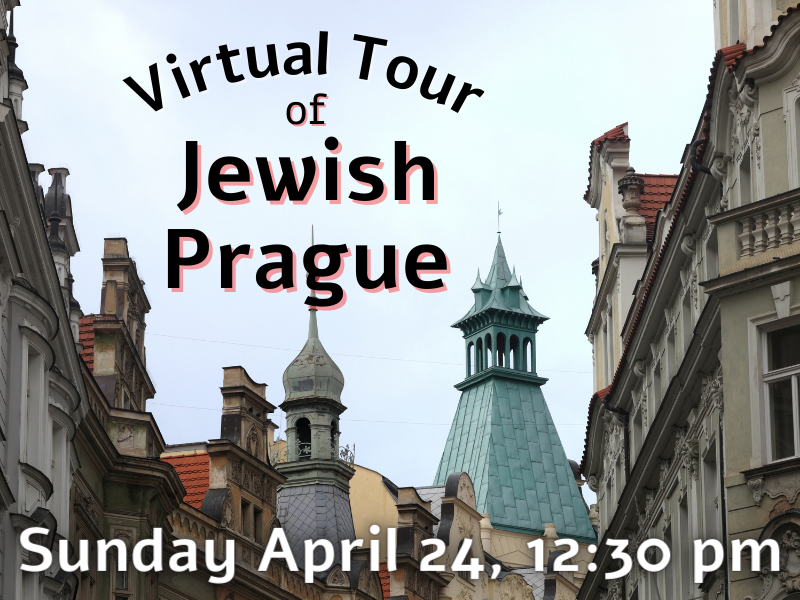 In celebration of Passover, we invite you on a rare live stream tour through Prague’s ancient Jewish Quarter. With top guides, Bonita Rhoads and Vadim Erent, and by special arrangement with Prague’s Jewish Museum, you will journey through the interior of the oldest functioning synagogue in all of Europe, the 13th-century Old New Synagogue, exploring its beautiful medieval features and major legends.

Next, you’ll take in the ambiance of the 600-year-old Jewish Cemetery and the haunting interior of the Baroque Pinkas synagogue, painted with the names of the thousands of Czech Jews lost to the Holocaust. Exploring the Klausen synagogue which houses one of the world’s largest collections of Judaica, you’ll enjoy stories of the unique culture and essential contributions of Czech Jewish figures, even while you learn of the enduring persecution the community faced, tragically culminating in genocide and cold war suppression in the 20th century.

About our tour guides:

Bonita Rhoads earned her PhD in Comparative Literature from Yale University in 2009. She was a lecturer at Charles University in Prague and an assistant professor at Masaryk University in Brno (the Czech Republic’s second city) for a decade. A native of New York City, Bonita moved to Prague in 2003.

Vadim Erent was born in St. Petersburg and immigrated to the U.S. at 13. He did graduate work in Slavic Studies at the University of Chicago, then spent a decade traveling through the United States as an interpreter for the U.S. State Department. After years of giving tours of Prague and neighboring capitals to friends and family, Vadim and Bonita founded Insight Cities to offer in-depth experiences to a wider group of travelers.

*A zoom link will be sent to registrants on April 21 as the Emanuel office is closed for Pesach on April 22. Please register by 4 pm April 21 in order to receive the Zoom link.